Settlement in the Sidmouth area goes back to the stone age and there are extensive remains of Bronze Age and Iron Age settlement, including evidence of religious ritual. The Romans left remains in the area, but no settlement has been found. The West Saxons arrived in the 7th century, settled the valley as farmers, and built Sidbury Church. Sidmouth itself developed somewhat later. The first records we have of Christian worship in Sidmouth date from about 1100. Archaeology gives a date for the first building of the mid 12th Century, while documentary records give a latest date of 1175. From that time there is an increasingly rich record of the church and its place in the community. On this page we offer a selection of primary  material that we hope will be of interest to historians interested in Sidmouth and its church. If you find the information interesting or helpful, we would appreciate your support for the maintenance of the church through the donations button at the bottom of the page.

The little we know about Sidmouth at the time of the Norman conquest, is contained in the Domesday Book, where it appears as part of Otterton, given to the Abbey of Mont St Michel in Normandy by King William. Consideration of the geography of the combined estate suggests that at least half of the farms of Otterton would have been in the Sid Valley, but Otterton itself was more important because of its port on the River Otter. In the Domesday Book, Sidmouth is only mentioned specifically with regard to salt pans leased by the monks of Ottery St Mary. However, it is possible to infer that some of the resources recorded for Otterton were actually in Sidmouth. Two versions of the Domesday Book survive: the preliminary survey for the southwest, called the Exeter Domesday; and the final version, called the Exchequer Domesday. Shortly after the conquest, the names of the membership of guilds of Exeter Cathedral was recorded on the flyleaves of the Exeter Book, an important surviving book of Anglo-Saxon poetry, including the guild at Sidmouth.

A church has existed on the current site since at least 1175. The evidence is in the attached pdf, which contains Peter Orlando Hutchinson's transcriptions of copies from the Otterton Cartulary of deeds dated 1175 and 1200 giving land (later became the glebe land) to the Abbot's "cleric" in Sidmouth. It also contains evidence from the 2009 internal excavations, which revealed foundations typical of the 12th Century.

Since then there have been 42 vicars of Sidmouth Parish Church. This is two less than implied by the list displayed in church, as two of the names in that list do not belong there. The mistake was made be George Oliver when he transcribed the diocesan records in  the early 19th Century, and was copied by Peter Orlando Hutchinson. When the error was pointed out to him, he recorded it in volume 4 of his History of Sidmouth, but unfortunately, most subsequent historians have relied on volumes 1 & 2, so the error has been perpetuated.

On 7th November 1316 the port records of Exeter record the arrival of "Le Cog Seynt Gile of Sydemouth" with 93 tuns, 10 pipes of wine and some iron under Richard de Todewille. The Todewilles were an important local family, based at what is now Tidwell, near Budleigh Salterton, but with long standing interests in Sidmouth. This is a big ship for the time and is evidently engaged in the lucrative trade in Bordeaux wine (Bordeaux being an English possession at this time). Richard became vicar of Sidmouth in 1322. A copy of the port record is shown below (courtesy of Devon Record Office) with the ship's name in the first line and its owner at the end of the last line. 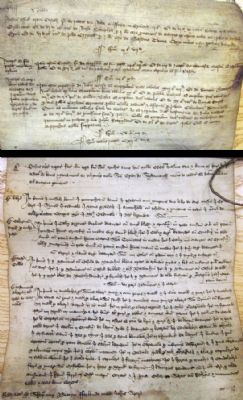 In 1433 an inventory of the church was taken. This was shortly after the Abbey of Sion in Middlesex had been given the patronage of the Church. We are not sure whether it was before or after the rebuilding that happened around this time. The original is shown on the right and a translation can be seen through the link below. 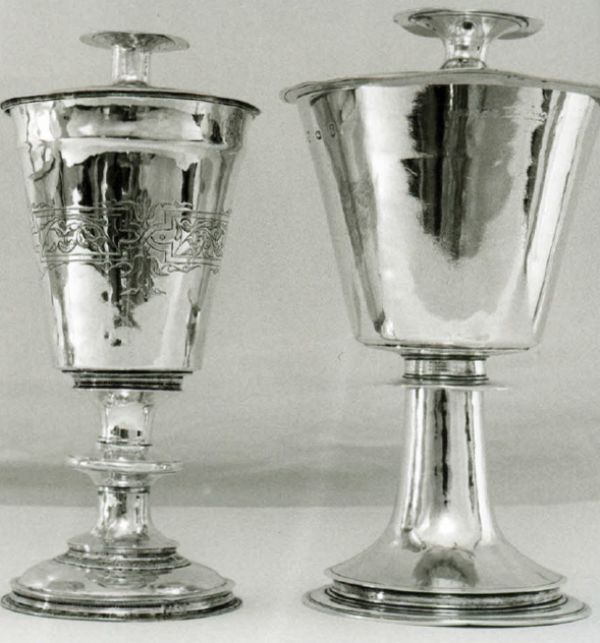 Following Henry VIII's break with Rome in 1534, the English church went through several stages of reform. The giving of communion wine to the laity required a larger vessel than the medieval chalice, and many parishes acquired new communion cups during the early part of Elizabeth's reign, some of which were made by melting down old chalices. Sidmouth's oldest cup dates from 1576 and was made in Exeter. Its donor is not known and it may have been made from a previous chalice. Sidmouth's second cup dates from 1635, was made in London and was given by Randolph Mainwaring, vicar of the church from 1611-35. He was brother to Christopher Mainwaring who had acquired the manor of Sidmouth from James I in 1605. The Mainwarings were a wealthy manufacturing family who moved to Exeter from Cheshire around this time.

The churchyard was closed to burials in 1874. A survey of memorials was carried out in 1935. Some headstones have been moved since then and many have become unreadable. However, if you are looking for burials in Sidmouth churchyard, this is the best source available. There are two links. The first is an alphabetical index of names, with reference to the location of the burial, first by map and then by number within the map. The second consists of maps of the parts of the churchyard with numbered graves, and details of memorials in number order.

Click here for the index of memorials in Sidmouth churchyard.

Click here for the maps and details of the memorials in Sidmouth churchyard.

We hope you have found the information on this page interesting and useful. Maintaining our beautiful old church takes a lot of voluntary effort and money. If you would like to help us with a donation, please click the button below to go to our online giving page. Thank you!